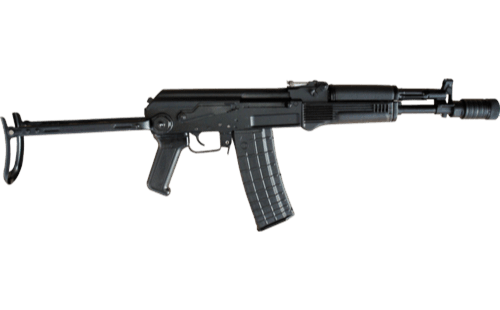 The 5.56 mm AR-M2F is a highly effective automatic weapon designed for the antipersonnel role at range of 500m.

The system operates on propellant gasses diverted through a vent in the barrel.

The barrel chamber is closed by turn of the bolt and engaging the firing stops in the receiver. The weapon is characterized by milled receiver made according to the method of hot die forging.

The weapon is fed from 30-round arcuated staggered black polymer magazine. Single and multiple targets can be destroyed by burst firing at range of 300 m. Skilled marksmen can hit targets in the single-shot mode up to 400 m.

The bullet has a lethal range of 1100m. The hammer-trigger mechanism has a hammer, which is activated by firing spring. The mechanism has a safety device-safety for setting from single to automatic fire mode as well as contrariwise.

The safety simultaneously serves as well as a safety lever preventing the accidental shoots. it is located on the right hand side of the receiver and is formed as a long pivoted lever.

When set in the utmost upper position the trigger is blocked. In this position the safety serves two other functions: prevents contaminating of the receiver through the bolt carrier handle slot in the receiver cover; prevents from reloading the barrel chamber. The lower handguard and the upper hand guard are made of highly strong and hardy plastics. A metal down folding butt and a shortened barrel are fitted to the rifle so the constriction generally features a basic individual weapon of assault and special task group.

The Assault Rifles design allows the attachment of 40×46 mm UBGL-M6 or 40mm UBGL-1 or GP-25 KASTYOR Underbarrel Grenade Launchers, and firing with them.

Mounting Rails Can not be fixed