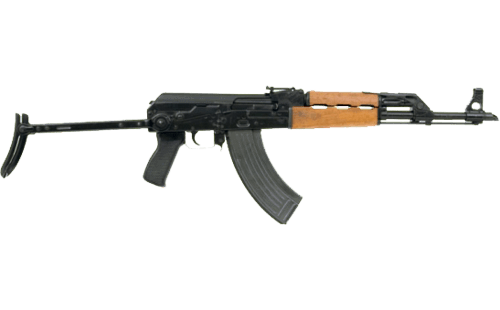 Assault Rifle M70AB2 functions on the basis of Kalashnikov AK47 system, which is known as an efficient and highly reliable locking system.

The Rifle M70AB2 is made by cold forging. The weapon has good ergonomy and it is excellently balanced. It has mild recoil, small weight and it is very compact.

Folding stock, that is simply and quickly moved from one position to another, enables use of the weapon in many Arms and Police units.

Assault Rifle M70AB2 can fire single shots and bursts. Change of the type of fire is made by moving the selector. In highest position, it blocks the triggering mechanism, trigger and prevents cocking of the gun. The weapon is safely blocked.

Assault Rifle M70AB2 is loaded from a detachable 30 round magazine. It is possible to use special 75 round magazine that is delivered at the request of a customer.

All members of the group, at the request of a customer, can have optical sight base and the set can include a mount and optical sight.

Compensator, screwed onto the muzzle, brings back the barrel axis in line with the aiming line during burst fire.

Rifle grenade sight is an integrated part of the gas block and rifle grenade attachment is included in the weapon set.

Knife, which is included in the set, is assembled to the weapon very easily.

Complete Set Cleaning Rod 4 Magazines /30 Rounds/ Sling Oil Can Cleaning kit Blank Ammunition Attachment Extras All products can have optical sight base and the set can include mount, optical sights or night sigts