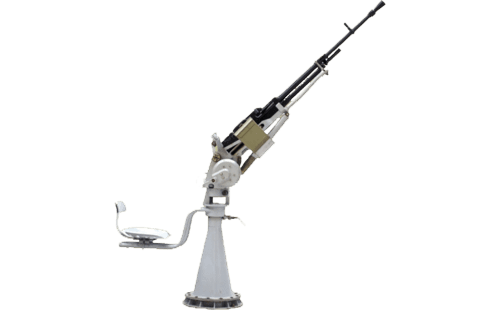 The main purpose of M87 – Naval version is anti-aircraft action, but it is also used for ground and water targets, at distances up to 2000m.

Rotating base can easily and quickly change elevation through elevation mechanisms and springs. Chosen position is fixed by a stop on the elevation device.

Aiming at air targets is done with a reflex anti-aircraft sight, placed on the rotating base, and at ground targets, aiming is done with front and rear iron sights.

During the fire, cartridge cases are ejected forward, which increases the safety of the shooter and the people near him.

When conditions are extreme, the position of gas flow regulator can provide an adequate gas flow, so the light machine gun will always function reliably.